Have you ever sworn off something, just to come back to it later in life and think to yourself, "Look what I've been missing?!”

That's the way I was with running. It was something that I struggled with and never really enjoyed.  I was around smokers growing up, and at some point in time, running began to physically hurt me. It wasn't until college that I was diagnosed with "exercise induced asthma." I mean, I was an athletic kid: softball, basketball… I did plenty of running. I guess it was probably in high school when I noticed I had a decreased lung capacity when running.

My freshmen year, I joined the track team at the behest of my gym teacher (who also happened to be a track coach). You see, we had learned about some field events in gym class. We did a standing triple jump in the hallway one day, and the teacher looked at me like he'd just found a needle in a haystack. Of course, that made me feel pretty good about myself, so I took his recommendation and joined the team. 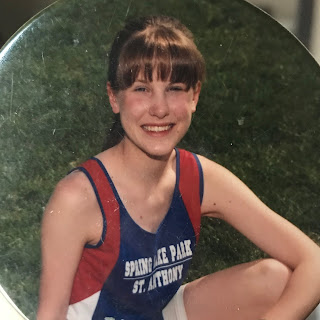 I foolishly thought that I could join track and field and get away with ONLY doing field events. I wanted nothing to do with the track part. But of course, being a part of track and field required me to run with the rest of the team during practice. I couldn't breathe. I felt like the slowest person, and I hated it. Exercise, especially running, was painful. Not only was I experiencing difficulty breathing, but those first few practices let me know how out of shape I was. I limped away from the first week of practice crying and ready to quit.

I ended up sticking it out and as a freshman I made it to number three on my school's "Top Ten" list for triple jump. That was a pretty huge accomplishment. I was the third best triple jumper my school had ever seen...WOW! Go me! In my freshman year, I also competed in the long jump, the 100 and 200 meter races, and the 4x100 and 4x200 meter relays. I refused to run any distance longer than 200 meters, because I was physically unable to sprint (or breathe) for more than that.  The coach actually tried to put me in a 4x400 meter relay at one meet. I called my dad, asked him to come get me, and I told the coach that I had to go home.

I was on the track team for three years. I opted to not be in track my senior year, because I wanted to be in the Spring musical, Hello, Dolly! It's hard to participate in multiple things when they conflict, and I disliked having to choose between sports and theater. In any case, I traded in my track uniform and running cleats for costumes and character shoes. I thought my running days were over. When I graduated high school, I was convinced I'd never be forced to run again. Boy, was I naive. Little did I know, two years later I would be volunteering to be yelled at to run.

Read the next part to my story here.

Email ThisBlogThis!Share to TwitterShare to FacebookShare to Pinterest
Labels: running