Ever since I had my first baby I've done group Halloween costumes with the exception of the Halloween that I was in the hospital after having my oldest child.

My oldest and I dressed up as Dorothy Gale and the Wicked Witch of the West for Halloween 2009. Then, in 2010, her brother was added to the family and we did a 1950's theme with my daughter and I dressing in poodle skirts and her brother dressed as a greaser.

The following year it was Snow White, Dopey, and the Evil Queen. That year I made ALL of the costumes by hand where as before I had only made a few things.

For Halloween 2012, I wanted to save myself some sewing, so I reused my Evil Queen dress and I was Mother Gothel with my daughter dressing as Rapunzel and my son dressing as Flynn Rider, again sewing everything.

The following year I got remarried and my new husband was a good enough sport to join in on our group costumes. We did a Mario Kart theme that year with Mario, Luigi, Peach, and Rosalina. 2014 was Despicable Me 2 (Gru, Lucy, a yellow minion, and a purple minion). In 2015 I was expecting a baby in October so I needed to have a costume that would be suitable for a baby belly or baby wearing. I strayed from sewing that year and actually made all of our costumes out of papier-mâché. We did a planets theme that even included our candy buckets. My oldest was Venus and carried a Mercury candy bucket. My oldest son was Earth and carried a moon candy bucket. I baby wore my youngest son and was Mars, and my husband was Jupiter.


The following year, my youngest was the perfect age to dress as Toby from The Labyrinth. 2016 also happened to be the 30th anniversary of the movie's release, and sadly, David Bowie had died in January of that year. So my toddler became "The Babe with The Power." My daughter dressed as Sarah Williams, my oldest son as the Blue Worm ('Alo!), my husband as Jareth, and I as the Hear No Evil Door Knocker.


In 2017, we dressed as characters from Big Block Singsong: Clown, Beats, Princess, Robot, and Monkey. It was another year of crafting the costumes. I used cardboard boxes and wrapping paper. If you have a young child and have never watched or listened to Big Block Singsong, I highly recommend it!

2018 was a bit harder to pinpoint our theme. While trick-or-treating in 2017, a friend and business owner gave my husband a stocking cap. As we were walking home I jokingly suggested to my husband that he dress as our friend for Halloween 2018. That eventually led to us dressing as "Hometown Heroes" with each of us dressing as someone we knew. Firefighters, a postman, a teacher, and a sewer and drain expert. However, on Halloween morning, my toddler, who was dressing as a fireman that year, declared he wanted to be a construction worker.

So that brings us to our family theme for 2019 which was determined by a wish my toddler had in 2018. We told our toddler he'd have to wait a year to be a construction worker, and he didn't let us forget it. So once we found out I would be noticeably pregnant for Halloween 2019, it was obvious that we needed to figure out how to incorporate a baby bump into a construction theme. After a few internet searches, I decided that my husband and I would be construction workers carrying signs. His sign would say "Bump Ahead." I debated what mine should say. I saw several examples of pregnancy construction costumes online that said "Under Construction," but ultimately, I decided to have my sign say "Bump," since it coincided with the "Bump Ahead" sign better. I made our signs out of foam board and dowels that I hand painted. We borrowed our construction vests and helmets.

I made my toddler's construction vest despite the fact that we have a vest in our dress up bin. That vest is very well loved and actually has my oldest son's name embroidered on it so that's why I opted to make the toddler a new one. I improved the vest pattern slightly by lining it, mostly since I had more than enough material to do so.

It didn't take me long to decide that his costume was almost too simple, and I opted to turn our wagon into a backhoe loader after finding images online for other wagons turned into construction vehicles. The backhoe loader is made of cardboard and painted with spray paint and acrylic paint, duct tape, hot glue, and foam board and bulletin board border for the wheels.

Figuring out what to make the older kids was a bit trickier. After several internet searches, I got the idea to make a traffic light costume and a traffic cone costume. I just had to convince my kids to dress up as those things. Constructing the traffic light was pretty easy. A cardboard box painted black with 4 painted tap lights. After having troubles with tap lights last year, I opted to use screws, washers, and nuts to attach the tap lights to the a piece of cardboard. It proved to be a smart decision because we didn't have problems with the lights falling off the costume. I used some craft foam to make the traffic light visors. 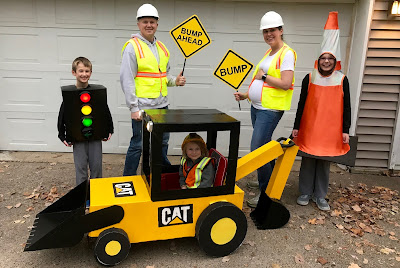 The traffic cone costume was by far the most challenging costume I made this year — maybe even ever. I've never really made such a structured costume that didn't involve papier-mâché or cardboard. But, I knew that I wanted the costume to be sewn to keep the costume lightweight. I ended up using a tomato cage for an under structure, and I covered it in roll craft foam. I did my best to make a pattern using paper, and I used that pattern to help cut the foam and the material. Then, for the base of the traffic cone, I used a piece of black EVA foam.

Overall, I'd have to say that I really enjoyed making our costumes this year, and I know that people enjoyed seeing them. People tend to remember us from year to year because our costumes are memorable, and we seem to be the only family in the neighborhood that consistently dresses up together. During our candy travels on that big night, my husband overheard a teenage boy sincerely stating to his friends that he wished his family was like ours. Cue collective "awe" with the Full House theme song trailing in.

Next year's theme has already been decided. My daughter declared that SHE gets to choose the theme as retribution for the fact that I made her a traffic cone this year. Even if I basically forced the idea on her, I know she enjoyed having a unique costume. And I KNOW she enjoyed the attention it garnered at the houses we went to.